Fans of the infamously challenging Bloodborne and Dark Souls games won't have to worry about developer FromSoftware going easy on them with its next game. In fact, it turns out Sekiro: Shadows Die Twice is likely to be even more difficult than those games.

"We think the level of enjoyment is going to really vary and be very broad from player to player," FromSoftware president Hidetaka Miyazaki told GameSpot. "If you are that player who likes to take their time and carefully piece things together and learn the enemies' weaknesses and positioning, and observe everything, you're going to have a great time.

"It's that sense of discovery as you explore the three-dimensional maps – you're going to find something, maybe a new prosthetic tool that makes you think, 'Hey, why don't I use this against that enemy?' When that clicks and when it works, that's going to be the sense of satisfaction for that player."

Miyazaki added: "Whereas the other [player] who just likes to rush in there, go katana-on-katana and feel that blade-to-blade, blow-by-blow gameplay, they're going to feel that intensity. They're going to get that really high-level challenge that's probably even more challenging than previous From games. So we feel everyone's going to be able to have something to suit them."

FromSoftware unveiled Sekiro: Shadows Die Twice during Microsoft's E3 media showcase last week. IGN learned during E3 that Sekiro was not going to be easy due to its revival feature, which is referenced in the game's title.

Sekiro will release for PlayStation 4, Xbox One, and PC in early 2019.

"Be one of the first in Southeast Asia to see the exclusive gameplay footage of Sekiro: Shadows Die Twice!" 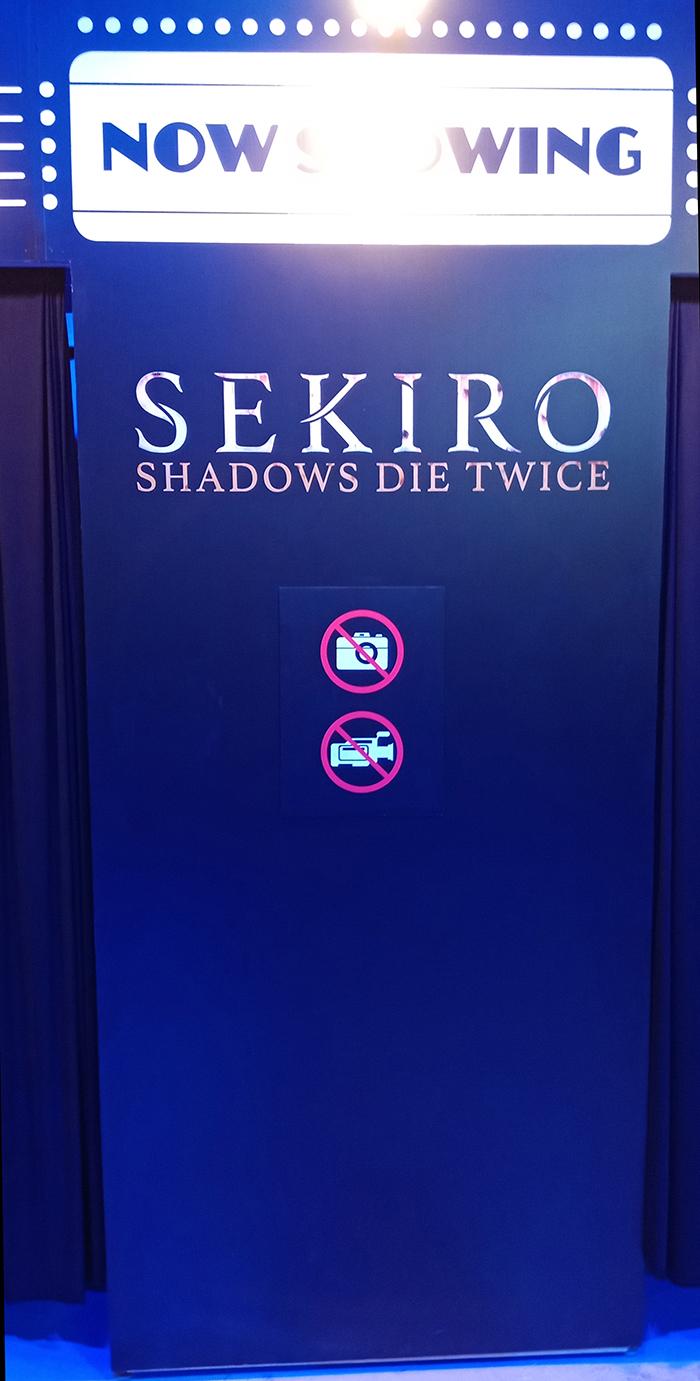 *The order of sequence might be a little off, I didn’t have time to take a note so this is all from my memory.

*I don’t know the protagonist’s name yet, so I’ll just call him Sekiro.

The video began with Sekiro standing on tree branch then he jumps and uses the grappling hook to reach the rooftop from afar.

He spots the enemy on the ground and uses a special attack to assassinate it. (same attack from twitter 5 secs preview)

When he's in the small building, there's old creepy woman walk slowly toward him, he hides near the door then uses assassination move, She’s dead in one-shot.

Then we saw he switches between his trick arms, seem like you can equip more than 2 at once.

He uses the ax to break enemy with a wooden shield, it’s the heavy vertical chop (same attack from E3 trailer) but then we saw he swings the ax horizontally 3 times before chop. So trick arms aren’t just one special attack, they have their own movesets.

At the courtyard, there are plenty of enemies. Among them is one giant, who seem to be captured? (his head and hands are locked in wooden pillory) Suddenly, one small enemy on the wall spots Sekiro and rings the bell to warns others. Sekiro kills it off by throwing shuriken (or kunai, I'm not sure), but it's too late, other enemies rush at him.

The clashing sword is really the main theme here, You has to parry opponents attacks back to back. The flow is much faster than Souls.

Player struggles to keep Sekiro alive then the giant breaks free and join the fight. It hits hard, only two heavy attacks and Sekiro is dead. Big red kanji appears on the screen.

Enemies are walking away, the player uses resurrection and sneaks behind enemies

Sekiro stabs foot soldiers in the neck, they die instantly but the giant endures the attack. Sekiro uses something that emits red/purple cloud, the giant can’t see for the moment. Sekiro attacks again and the giant’s on fire, same as Sekiro’s sword. He finishes the fight with brutal execution kill.

There's a lot of blood during the fight but it’s brighter than Bloodborne’s blood effect.

He can parry mid-air.

I assume small orange kanji when the enemy uses special attack means that attack can’t be parry by the sword, he can use the trick arm to counter it though. (The animation is pretty cool, locking enemy weapon with the arm then counter it.)

In the next area, a big wooden bridge is broken so he jumps to a faraway tree branch and drops to the lower floor.

It’s a big leap which would hurt you badly in previous souls games, but seem like Sekiro take no damage at all.

In the snowy valley, the enormous albino snake appears. We saw only the head but we can tell it’s so huge. Sekiro hides in the bush, waiting for it to turns away.

There’s red aura around the screen when the snake is suspicious.

When the snake looks somewhere else Sekiro rushes to the cave nearby, but It notices. It hisses and attacks immediately (this is quite a jump scare, a lady near me jumped so hard), but the cave is too small, the snake can’t get it so it retreats.

There’s a secret door on the cave wall. It has a white human sign on it (looks like it was written with chalk), he pushes it then it leads him to the new route.

Sekiro walks toward to red bridge then Corrupted monk jumps down and boss fight begins.

The scenery is beautiful with maple trees, those leaves on the floor float and move along your movement.

There’s a fog door at the entrance when the boss appears.

After relentless parrying, the boss kneels and Sekiro executes riposte. The music changes when the boss begins phase 2, the surrounding is getting blurry, all color disappears you can see only in black and white. The monk warp here and there, strikes Sekiro from the blurry cloud, then he died and the demo ends.

You restore health by drinking from a calabash, a green kanji appears when you drink.

I can see why they don’t release this footage for the public. There are screen tearing and frame rate dipping all over the place. It doesn’t look polished at all. I’m quite certain that this is an old E3 build.

I recorded the audio, but the quality is REALLY bad (lol I'm sorry I tried). If you interested, you can download it here.r/

That's it! I hope this info is helpful for some of you guys until they release direct footage at Gamescom.

p.s. They let us have this nice collectible card after watching the footage. If you go there don't forget to ask for it. 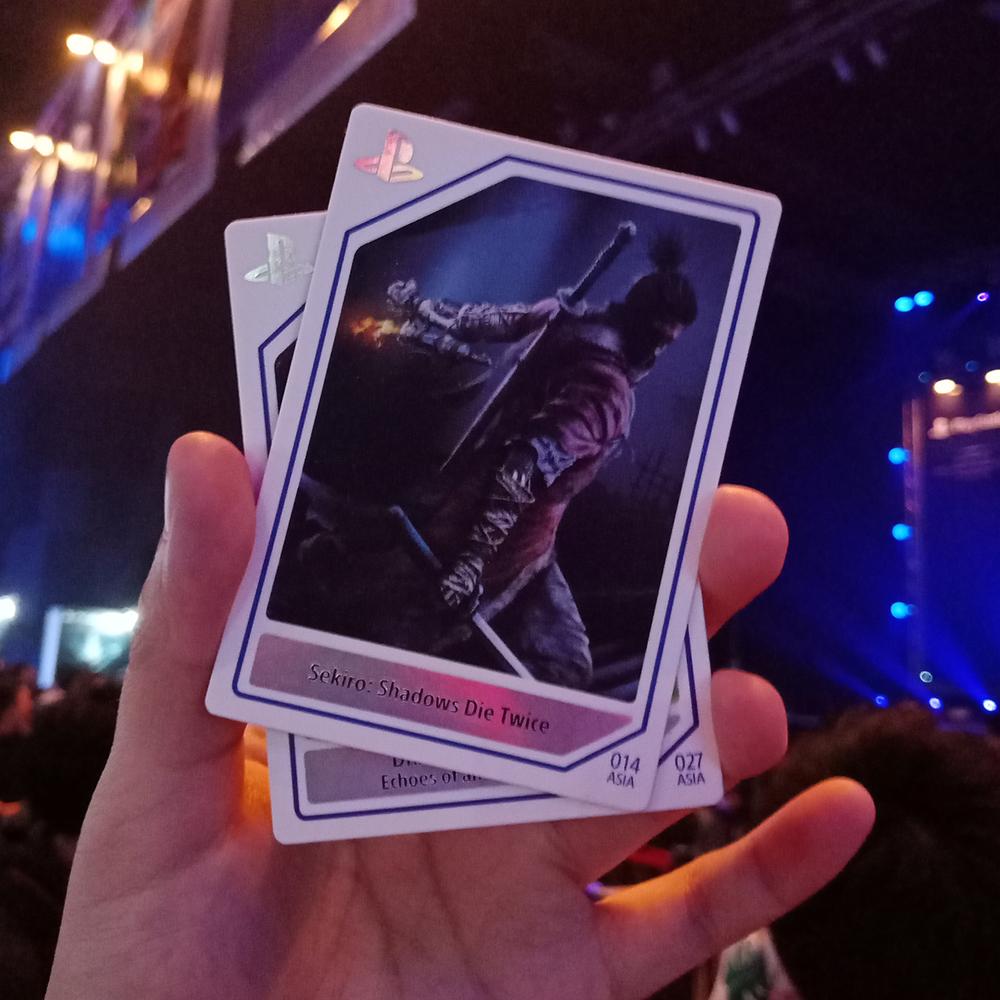